Go chard or go home - why we're stoked chardonnay is back

By Vinomofo
about 1 year ago
3 min read

Remember when knitting went from being an oldies’ pastime to the achingly cool hobby of Sarah Jessica Parker and Cara “eyebrows” Delevigne?

Chardonnay went from boom to bust in the 90s. At its low point, it took a beating in kitsch comedy Kath & Kim (“It’s French, the h is silent”), it was laughed at by a snobby ACB (Anything But chardonnay) movement and sales slumped after it was named Bridget Jones’ favourite tipple.

But this resilient wine is back, baby. In fact, despite its daggy reputation, it’s now the world’s most popular white wine. Take that, sauv blanc.

And let’s not forget its highly esteemed home in the Burgundy region of France where it’s produced in the Mâconnais district as relatively affordable, fruity, unoaked, high-value white Burgundy. Oh, and don’t forget Chablis, also produced in Burgundy, which has a more zippy, lean and mineral-like flavour profile.

Let’s head back to home turf, and the three reasons we’re loving chardonnay all over again. 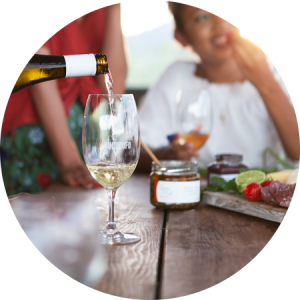 2. It knows how to move with the times

Chardonnay was booming in the 80s. It was buttery and oaky with big, brash flavours. Some even called it “urine coloured”. Nice.

It fell out of favour because seemingly classier wines became popular. Tastes changed. Our palates became more refined and craved the grassy notes of sauvignon blanc and the new kid on the white block, pinot gris. But in recent years, progressive winemakers have stepped back and produced a more subtle, sophisticated drop. They use different winemaking techniques and maturing methods, so the oakiness takes a back seat. The result is a fruitier, more complex wine.

Mind you, some of them also choose not to give a fly about what’s trending, and keep on producing the bold styles many mofos still love. There are some old-school chardonnays out there, and we damn well approve of their sassy attitude.

Chardonnay may well be the grape equivalent of eggplant or tofu – it can taste wildly different depending on who’s had a hand in knocking it together. That’s why it’s known as the “winemaker’s wine”.

Yarra Valley legend and winemaker Rob Dolan says, “It’s a robust grape variety able to take almost anything a winemaker throws at it”.

It’s a blank slate that can be peachy and elegant or loud and nutty, depending on the maker. For example, there’s the bright and perky Mimi Flamingo from the Yarra through to the unashamedly big and buttery chardy from Coopers Creek, New Zealand. It also plays a starring role as one variety in the trio of grapes used in Champagne.

More than any other white wine, chardonnay’s superpower is reflecting the diverse regions it’s made in.

If we played the fun blindfold game and offered you a few different chardonnays to taste, you may even guess them to be different varieties. So, this is one wine you really can’t judge from its variety status alone.

Not sure what kind of chardonnay is for you? Check out our guide to chardonnay.

And do yourself a post-lockdown treat – jump back onto chardonnay.