Behind the wine with Max Allen

By Vinomofo
over 2 years ago
5 min read

If he wasn’t a wine writer, Max Allen might’ve been a filmmaker. It’s the context and background that interests him, not necessarily the medium. Meanwhile, he’s a fan of Americana music, is in the middle of Malcolm Gladwell’s Revisionist History podcast, and happens to be writing a book on Australian drinking culture – more on that later.

Max isn’t just a multi-award-winning author and drinks columnist for the Australian Financial Review. Having tasted, judged, considered and written about everything wine for about a quarter of a century, his convictions speak to the future, and a larger narrative. So I asked him about his.

From art-lover to wine futurist

It’s a classic story, to begin with. Boy goes to art school; falls in love with wine. Works in vineyards and wineries. Then starts writing in ’92 and (literally) gets in the back door of The Age, to deliver a typewritten manuscript to the desk of Rita Erlich.

“There was a food and wine website called Hogshead I wrote for in 1995. It went terribly because it was way ahead of its time. Then there was Wine Planet, around ’98/’99, which blew up in the dot com boom – somebody still needs to write the story about that. It was above Camperdown Cellars, had that real startup feel, and got too big too quick. We had a dream at the time that the editorial would drive commerce...”

Max co-authored his first book, New World of Wine, in 1997. A number of other publications led to his seminal 2010 publication, The Future Makers: Australian Wines for the 21st Century. Sensing a theme here?

We started Max off with some classic get-to-know-you questions – and for us, that means his food and wine loves.

“Ever been to Baker D. Chirico, in St Kilda? Their Garibaldi are incredible. You know, squashed-fly biscuits.”

“It’s a bit like wine. There’s so much out there, and sometimes you don’t know what you feel like. Then you find something, you drink it to death, and you don’t feel like it any more.

“Saying that, Bill Hicks would have been one of the best I’ve seen.”

“I don’t do a lot of fancy cooking... I haven’t done it for awhile, but there’s that Italian pasta dish – orecchiette, broccoli, anchovy and pecorino. You can jazz it up with chilli and lemon as much as you like. I don’t even like anchovies, but when they melt in the pan as part of this dish... it’s just delicious.”

“I’m in a difficult position because that’s my son’s favourite pizza. I wouldn’t, but I’m prepared to do it when it makes other people happy.”

“I’m a huge fan of the wines of southwest France. I cut my teeth in the UK wine trade, where you used to be able to get old vine grenache, carignan, mourvèdre and syrah that were really interesting, delicious, and cheap. Now that part of the world has top quality producers working with those old vines – they’re full-bodied and gutsy but still savoury. I went to Minervois last year, and I was in heaven.”

No pressure, but where’s your favourite place in the world? 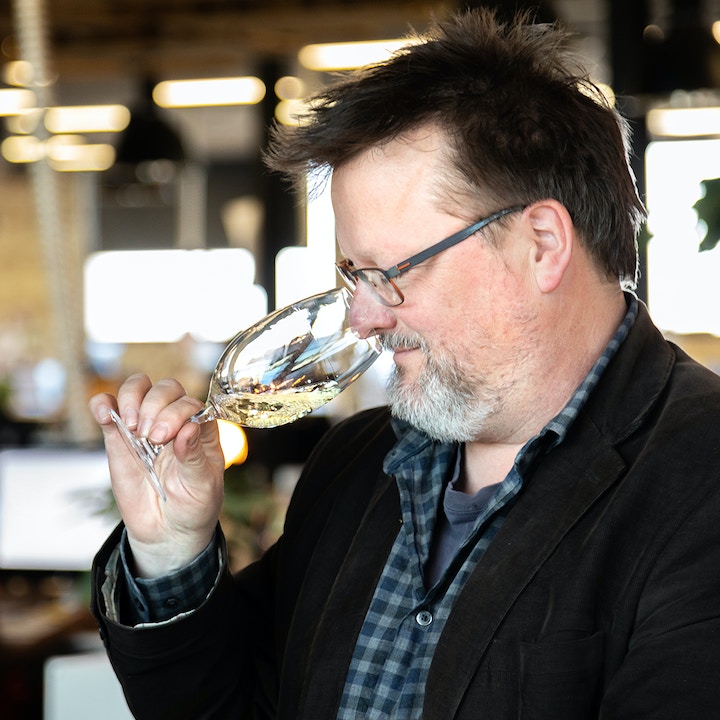 Talk turns to what’s in store for Max and his readers.

“Central Australia, for sure. I’ve done all of Australia’s extremities, but I’ve yet to do the pilgrimage to the middle.

“I’ve also just read Deep Time Dreaming – it’s a history of archaeology in Australia; things like Mungo Man, Mungo Woman. It could be quite dry, but it’s written by a great writer, who lives in the field. It’s about the culture as much as the archaeology.”

Tell us about your upcoming book on Australia’s drinking culture.

“First of all,” says Max, “it’s ‘cultures’, not ‘culture’. Australia’s drinking culture is a much richer history than I thought it was, and there are aspects that have been completely forgotten. For example, UDL started in Australia in the ’60s – Australia may even have been the first to invent a cocktail in a can.

“Seb Reaburn (the cocktail guy) even told me that, back in the 1850s, there was a guy on Collins St who made bottled cocktails to take to the races. I mean, that’s pretty progressive!

“There’s this perception that in Australia there’s only one drinking culture, which leads to controversy like the Sydney lockout laws.

“The ways we drink can tell us a lot about ourselves. It’s a good way of looking at Australia, and no one’s done it before in the way I’m doing it. I think I have something to add to the conversation.”

Max Allen’s writing isn’t for the glory of wine itself, instead reflecting on wine’s unique ability to connect, create conviviality and seed culture, by highlighting the stories woven around it. Wine is far from just a drink, and we all know that.

But it can’t hurt to be reminded.